This led to an improved situation for CEE businesses. The number of insolvencies decreased over the course of 2015 in 9 out of 13 countries, while the GDP-weighted regional insolvency average was -14%. The region showed a varied picture, with double-digit deterioration recorded in Ukraine and Lithuania, whereas Romania and Hungary enjoyed significant improvements. Coface forecasts that businesses will continue to take advantage of supportive conditions and that company insolvencies will drop by -5.3% in 2016.

While the largest emerging markets suffered from slowdowns in growth - or even recorded recessions - CEE economies benefited from an improved and favourable economic environment last year. The average pace of regional GDP growth accelerated from +2.6% in 2014, to +3.3% in 2015. The export industry profited from a slow but gradual recovery of its main trading destination, the Eurozone. Moreover, the combination of further falls in unemployment rates, rising wages, low inflation, depressed commodity prices and historically low levels of interest rates, made private consumption a key driver for growth. Although CEE economies had already been benefiting from EU co-financed investments for some years, the pace of use accelerated in 2015, as it was the final year of access to EU financing budgeted for the years 2007-2013. These investments made a significant contribution to the growth recorded by CEE economies last year.

Multifaceted CEE: positive and negative signs within the region

The dynamics of insolvencies varied between CEE economies. The strongest decrease, of almost -50%, was recorded by Romania, which benefited from significant fiscal stimuli. The highest increase, of +20.8%, was recorded by Ukraine, which experienced another year of recession as a result of the conflict with Russia.

Overall, however, 2015 insolvency statistics paint a more positive picture of CEE companies. This trend should persist, as corporates continue to benefit from the favourable economic environment, especially when compared to the turmoil being experienced by many other emerging economies. The regional improvement is confirmed by Coface’s country risk assessments, which included several upgrades this year. In January, Hungary’s assessment was raised to A4, while in June Latvia was upgraded to A4, Lithuania to A3, Romania to A4 and Slovenia to A3. Most CEE countries have thus moved to acceptable risk levels.

“Business conditions will remain supportive but less so than last year” said Grzegorz Sielewicz, Region Economist Coface Central Eastern Europe. “We forecast that insolvencies will decline by -5.3% for the full year of 2016.” Further improvements in the labour market, along with growing confidence, will reinforce household consumption as the main growth driver for CEE economies. The contribution of investments will not be as high as last year, due to a slow start to new EU co-financed projects. This is weakening the expansion of the construction sector and various other industries associated with it.

On the external side, CEE countries will remain active exporters, although the slowdown of global trade could hamper their ambitions. Global turbulence, including the steeper Chinese slowdown - which particular affects Germany, the CEE’s main partner - could diminish export dynamics. 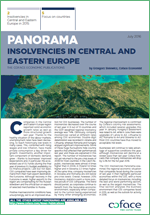 
Insolvencies in Central and Eastern Europe