Coface results for the first quarter 2018:

Net income of €35.5m and RoATE1 at 8.8%. Fit to Win execution drives profitability in a supportive economic environment

Unless otherwise indicated, changes are expressed by comparison with the results as at 31 March 2017

"The first quarter of 2018 marks the sixth consecutive improvement in our loss ratio thanks to the actions taken in the framework of our Fit to Win strategic plan. Over the last four quarters, and in a still favourable economic environment, our average combined ratio reached 81.5%, below the average target for the cycle. Improvement in the quality of our client service is well underway and it is underpinned by living our values day-to-day: client service, expertise, collaboration, courage and accountability.

Our new tagline "Coface for trade" underlines our commitment to trade and commercial exchange, levers of wealth creation and stability. It expresses our purpose, which is to help companies develop their business.”

The Board of Directors of COFACE SA examined the summary consolidated financial statements for the first three months (non-audited) during its meeting on 24 April 2018. They have been previously reviewed by the Audit Committee at its meeting on 23 April 2018. 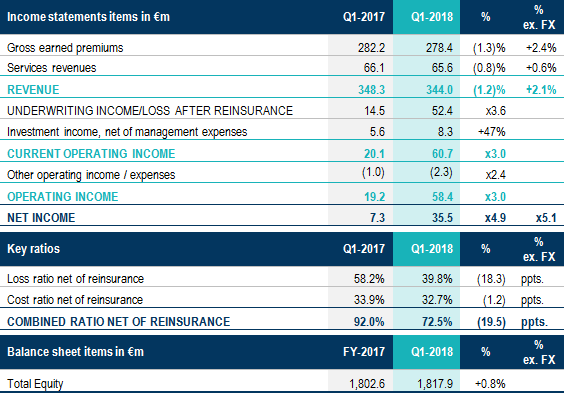 Coface recorded consolidated turnover of €344.0m in Q1-2018, up 2.1% at constant FX and perimeter compared to Q1-2017. On a reported basis (at current FX), revenues decreased by (1.2)% mainly due to the strengthening of the Euro against other currencies in which the Group transacts.

In line with the trends of the previous quarter, growth in Coface's clients’ activity had a positive impact of +2.0% in the quarter. Price decline remained under control at (1.9)%, reflecting good commercial control in a low claims environment.

Client retention was high in all regions, reaching a record high of 93.9% for the Group. New business production for the first quarter was modest at €33m, down €10m compared to Q1-2017, despite an improvement in Asia.

Revenues from other activities (factoring and services) were down (4.9)% vs. Q1-2017 mainly due to lower factoring revenues in Germany in a context of controlled margins.

In Northern Europe, turnover decreased by (1.1)% compared to Q1-2017 (on reported basis and at a constant FX and perimeter), mainly affected by lower factoring revenues. Credit insurance revenues stabilised.

In Western Europe, turnover increased by 2.2% and by 3.6% at constant FX and perimeter, thanks to client activity and to the momentum of new business in Single Risk.

In Central & Eastern Europe, revenues grew by 5.3% and by 5.2% at constant FX and perimeter. All countries in the region contributed to this performance. Factoring revenues were also growing (Poland).

In the Mediterranean and Africa, a region driven by Italy and Spain, turnover rose by 5.8% and by 7.1% at constant FX and perimeter, due to a continued strong commercial performance and dynamic policyholder activity.

In North America, turnover decreased by 14.8% and by 2.2% at constant FX and perimeter. Notwithstanding a strong currency effect, the Group has now stabilised its portfolio. A low loss ratio environment gave rise to recognition of premium refunds.

In emerging markets, performance was mixed. Turnover in the Asia-Pacific region decreased by 9.0% but increased by 2.7% at constant FX and perimeter. Client activity is growing and the region recorded a strong improvement in sales performance. Latin America decreased by 23.4% and 10.8% at constant FX and perimeter. This decrease is due to the recognition of premium refunds and the temporary delay in the booking of certain contracts.

For the sixth consecutive quarter, the loss ratio improved. The gross reinsurance ratio was 39.7% for the quarter. The Group's reserving policy remains unchanged. The rigorous management of past claims enabled the Group to record 35.0 points of recoveries on previous years. These levels are well above the historical average, driven in particular by good recoveries on major claims recorded in previous years.

Coface continues to implement its operational efficiency programme. Cost savings in the first quarter amounted to €9m, up €6m compared to the savings achieved in Q1-2017. The annualised target of €30m for the year 2018 is maintained.

These cost savings more than offset the €8m of investments made in the first quarter (up €6m vs. Q1-2017). As a result, the change in internal costs is mainly due to the effect of inflation.

The Group's cost ratio net of reinsurance was 32.7% in Q1-2018, an improvement of 1.2 points year-on-year. It benefited from the increase in turnover but also from improved reinsurance conditions (commissions).

In an environment still marked by historically low rates, Coface succeeded in recording a very slight increase in current portfolio income (i.e. excluding capital gains) to €10.0m (vs. €9.8m in Q1-2017). The accounting yield[1], excluding capital gains, stood at 0.4% in 2018, and remains stable compared to the previous year (0.4%).

Operating income amounted to €58.4m in the first quarter, tripling compared to the previous year. The improvement is mainly due to a lower loss ratio.

As previously announced, a dividend of €0.34 per share[2] will be proposed for the 2017 financial year, corresponding to a pay-out ratio of approximately 64% of earnings per share (€0.53 per share). In addition, the share buyback programme is proceeding according to plan.

The positive net result of €35.5 million, partially offset by the decrease in unrealised capital gains on equities and bonds (increase in interest rates) is the main explanation for this evolution.

The annualised Return on Average Tangible Equity (RoATE) stood at 8.8% as at 31 March 2018, mainly due to the improved technical result.

In 2018 global GDP growth should remain high and stable at 3.2% (Coface estimate). Nevertheless, business confidence has passed a peak in the Euro area, in the United States and Asia, against the backdrop of rising protectionism and difficulties in hiring in many countries. Specific risks remain, whether political (Brexit, Russia) or sectoral (distribution).

In this context, Coface, with its strengthened risk management, continues its rigorous underwriting policy and confirms its anticipation of a good year 2018, particularly for the first semester. Q1-2018 results benefit from favourable trends (bonis, strong global growth) and they should be considered as top-of-the-cycle-results. This is highlighted by a combined ratio 10 points below the targeted average for the cycle, impacted, in particular, by an excellent loss ratio.

This year, Coface will continue the implementation ofFit to Winwith the same determination. The modernisation of the Group's culture and living our values day-to-day (client service, expertise, collaboration, courage and accountability) are key factors in the success of theFit to Winstrategic plan. The new "Coface for trade" tagline marks an important step in mobilising teams around a strong purpose; it expresses our commitment to trade and commercial exchange, levers of wealth creation and stability.

The Group maintains its annualised cost savings target of €30m in 2018. It plans to invest €19m this year in long-term value creation in initiatives to boost business momentum, improve quality of service, transform digital infrastructure and develop a partial internal model (Solvency II). On this topic, Coface continues to monitor potential regulatory changes that may increase capital requirements under the standard formula calculation. At the same time, the Group continues to develop its partial internal model, which it intends to file before the end of the first semester of 2019.

The targets of delivering a net combined ratio of around 83% through the cycle and RoATE above 9% are maintained.

The presentation will be available (in English only) at the following address:

[1] Book yield calculated on the average of the investment portfolio. 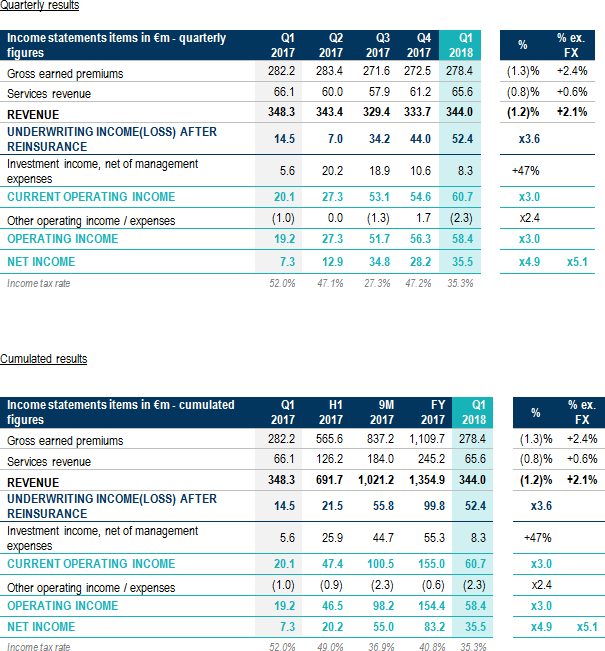