During the China-Celac Forum, held at the beginning of last year, China announced its intention to increase its investment stock in Latin America to 250 billion USD within the next ten years and to attain an annual trade flow of 500 billion USD during the same period. China also outlined the building of a "1+3+6" cooperation framework with Latin America. "1" would refer to one plan, "3" to the three engines of trade, investment and financial cooperation and "6" to six fields of industry connections to be strengthened as priorities between China and Latin America (notably energy and resources, construction of infrastructures, agriculture, manufacturing, scientific and technological innovations and information technologies).

This announcement is good news for Latin America, which experienced a recession in 2015. According to Coface’s estimations, GDP dropped by 0.6 % in 2015 and is expected to show a marginal improvement in 2016 (-0.2 %). The deceleration of GDP growth seen in Latin America has been ongoing since 2011. The movement gained further intensity with the fall in commodity prices which began in mid-2014.

Although to some extent this slowdown results from internal factors, the impact of less dynamic Chinese activity has not been without consequences for Latin America, especially in terms of trade. Moreover, this phenomenon has contributed to the downwards pressure on global commodity prices which represent a major source of revenues for Latin American economies. With China’s economic model shifting from an investment-led to a more consumption driven economy, prices of metals and energy in particular are unlikely to benefit from a strong rebound. Prices of agricultural products will not increase significantly in the short term but should be higher in the long term, given the structural upwards trend of demand linked to the world’s expanding population and the growth of the middle classes in emerging countries.
In this edition we will focus on the strengthening of ties between China and Latin America. What initially began as links for trade have now expanded to other areas. For example, the Asian giant is becoming an important financial player for economies with restricted access to international markets and is increasing its investments in the Latin American region. Nevertheless, loan conditions and project implementation remain key issues. 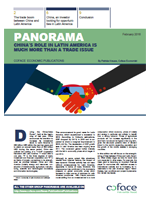