In May 2014, following 5 weeks of legislative elections, India’s Bharatiya Janata Party (BJP) leader – Narendra Modi – became Prime Minister. Elected without the need for allies, this is the country’s first non-coalition government for 25 years. Known to be pro-business, Mr Modi’s election has instilled hopes for reforms in a country where bureaucratic impediments and poor infrastructure have been constraining private and public investments for years.

After only one year in power, the Modi administration has already initiated major measures, such as the Goods and Services Tax bill which is expected to boost growth and fiscal revenues, as well as increase the foreign direct investment ceiling in several sectors.

In 2015, India seems to be one the bright spot in the world’s economy and Coface expects the country’s GDP growth to reach 7.5%. But to what extent have Modi’s reforms contributed to the recent pickup in growth?

To answer this question, we should first recap on the situation and context of the Indian economy when Mr Modi came to power. We will then review the major policy actions taken by the government so far and their impact on the economy, as well as the challenges that remain. Finally we will analyse sectorial issues, focussing on the sectors which are likely to benefit from the progress in the implementation of reforms – notably the infrastructure, steel and IT sectors. 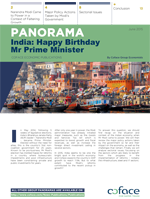 
Press release - Is India’s economic revival thanks to the Modi government?