The decline in world trade is confirmed for this first half of the year and even if a slight recovery is expected in the second half of the year, it should suffer a 0.7% loss in volume over the year according to the Coface barometer. World economic growth is expected to decrease from 3.1% in 2018 to 2.7% in 2019 and then remain stable in 2020. In this context, Coface expects that a majority of countries should see an increase in corporate insolvencies[1] this year.

Sectors in tension…particularly the automotive one

Automotive, metallurgy, distribution, clothing, there are many sectors that illustrate well the global economy vulnerabilities. Coface is therefore increasing its assessment of the credit risk of automotive companies in 13 countries for the second time in six months for many of them (and for nearly all automotive sector risk assessments in Europe).

The automotive sector is emblematic of the global economy difficulties. It is at the same time penalized by a cyclical slowdown in many regions, political risks related to trade protectionism and changing consumer behavior (e.g. high household equipment levels in China and new anti-pollution regulations in Europe).

Trade tensions between China and the United States will contribute to a slowdown in the US economy together with lower domestic demand, with economic growth estimated at 2.5% this year and only 1.3% in 2020, compared to 2.9% in 2018. As for China, the trade war has notably led to a fall in its exports to the United States by 10% in the first four months of the year.

More generally, uncertainties about the outcome of negotiations between the Chinese and US governments and the climate of tension generated by this trade war continue to weigh on the level of business confidence. Business confidence indicators in many countries around the world, have declined over the past year, particularly in the manufacturing sectors. This is the case in Germany where business confidence indicators such as the IFO are at their lowest level in five years in June. The annual industrial production rate is on a downward trend. Coface forecasts economic growth at 0.8% this year compared to 1.5% last year. Coface downgrades its country risk assessment for Germany from A1 to A2. Three economies that are dependent on the German economy are downgraded as well. This the case for Czechia and Slovakia (both from A2 to A3), as well as Austria (from A1 to A2).The business risk also increases in Iceland (downgraded to A3). On a more positive note, companies in Uzbekistan (from C to B) and Kyrgyzstan (from D to C) are benefiting from continued relative political and economic openness. 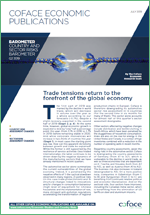 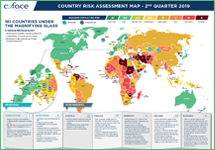 Download this press release : Coface Barometer - Trade tensions return to the forefront of the globa... (115.43 kB)