The most-widely traded base and ferrous metals have benefitted from a bull market1 since mid-2016. Prices have increased on the back of robust global economic growth and technological shifts that have triggered a surge in metal use. Such an uptick in demand has not been observed since the period following the 2008-2010 economic and financial crisis. The use of these metals has been buoyed by highly synchronised growth recovery in the major economies, and has helped the mining and smelting sectors to recover after the end of the commodity super-cycle2 in the late 2000s.This environment of rising prices and booming demand has triggered the reopening of some mines, which could reduce global supply deficits for aluminium, copper, and zinc.

However, we expect that the trends in the sector will be mixed going forward. Taking into account the rising demand for metal in the context of a still-positive global economic outlook, it appears that we are already beyond the peak of global growth3, which should theoretically exert downside pressure on prices in the medium- to long-term.

Other factors that are likely to impact the metal sector include the still-high level of geopolitical tension and an increasingly protectionist environment. Metals, being an important component for the manufacturing industry, are often the target of protectionist measures – an example being the United States’ March 2018 decision to impose duties on all imported steel (25%) and aluminium (10%) products, in order to protect American jobs as per President Donald Trump’s electoral campaign promises.

A reshuffling of priorities in important markets across the world, such as China and the eurozone, could also hamper this momentum. Speculative forces have fostered volatility, most notably in the zinc market. While these factors are all valid, some key differences are noteworthy, and the outlook is not homogenous for all metals.

Coface’s statistical pricing model predicts that the price of base metals will continue to increase over the next two years, while steel prices will continue to increase in 2018 before declining in mid-2018. According to the results of our statistical model, at the end of 2019, we forecast increases for aluminum (2%), copper (2.4%), nickel (18%), and zinc (14%). Steel will be the only metal to post a decrease (-19%).

1 A market in which securities or commodities are persistently rising in value.
2 The super-cycle was the boom in many commodities’ prices, fuelled by the Chinese need to fulfil its infrastructure needs. It ended when Chinese economic growth softened from 2012 onwards.
3 Coface Economic Research Department (2018). Barometer - Q1 2018, beyond the peak of global growth. Paris: Coface. 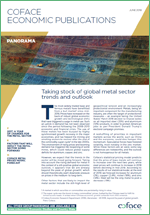