The rise and rise of political risks

Political risk seems to have been at the core of concerns since 2016,

following numbers of articles and editorials on the topic. With increasing uncertainty in Europe and in the United States, and the systemic effects that could stem from it, the impact of political risk has become a reality. But are we in a world in which political risk is more significant?

While analysts strive to describe the phenomenon, there is little agreement on a definition or even a measurement of political risk. Yet, the latter encompasses several dimensions, but how can we combine the occurrence of a war, the possibility of a popular revolt, and the rise of populism? That is the question addressed by this study through a new, quantified risk model covering 159 countries, from 2007 to 2016.

The Coface model measures various types of political risks in relation to their impact on business activity. Two major groups are taken into consideration for each country: security risk, which includes conflict and terrorism, and the risk arising from political and social fragility, which includes a measurement of populism for developed countries.

If you wonder if there is an increase in political risk on the global scale, the answer is yes. Since 2013, political risk has increased but this increase conceals different dynamics depending upon the region. The Middle East remains the one in which risk is noticeably highest, but risk has significantly increased in Sub-Saharan Africa and in the CIS. For advanced countries, the situation in some major economies has improved since the 2009 crisis, but the rise of populism and security concerns in countries hit by terrorism deteriorate the score in some European countries.

DOWNLOAD THE PUBLICATION "The rise and rise of political risks" 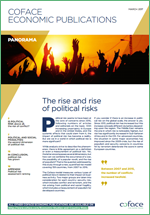