Panorama LATAM : Growth picking up at countries of Pacific

Three decades ago Latin America used to be known by negative terms such as dictatorship, debt crises and high inflation.  The region's GDP increased by an annual average of only 1.5% in the 1980s. One decade later the rate rose to 2.4% and finally achieved 4.2% between 2003 and 2013. Over the years Latam has begun to  be associated  with  economic  growth,  new  middle class,  poverty reduction and controlled inflation.

Despite general improvements in the region, growth has surprised on the downside in almost all countries in 2014 (see chart 1). Why and what are the most impacted sectors? This subject will be addressed in the Latam Panorama.

ln this edition we will focus on two countries of the Pacific Alliance: Mexico and Peru. Mexico seems to have a positive outlook in the medium term, due to recent structural reforms promoted by its government. This panorama explains why. And the Peru's case is puzzling as well: the country's medium-term prospects are very favorable (Peru has been identified as one of the 10 "new emerging markets" by Coface earlier this year), but the growth momentum has been fading over the past months as well.

We will initially discuss the region's macroeconomic current environment and highlight on the two countries, both from a macroeconomic standpoint and a sector one. Secondly we assess the extent of the impact on sectors of this sluggish GDP growth in the region  To do so, we detail our Latam sector barometer, which reveals financial performance of companies in different industries coupled with Coface payment experience. The third part will be focused on countries sensitive industries. 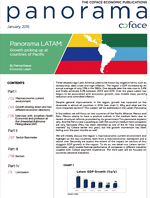